Christ Church St. James is a relatively new parish with deep historic roots in the South Etobicoke area. Formed on January 1, 2010 from the amalgamated historic parishes of Christ Church, Mimico and St. James, Humber Bay, we are making history together out of our shared roots. Christ Church was the “mother” church for many of the churches of South Etobicoke (including St. James) and has the longest history.

Church services were likely held as early as 1823 in the area by Squire Gamble for his rowdy lumbermen who had no work on Sundays, but the parish was not established until 1827 with the baptism of four children of the Peeler family. Land on the present site of the Cemetery (329 Royal York Road) was donated by Squire Gamble and the first church constructed in 1834.

A second church was constructed to replace the first in 1889 in the fashionable Richardson Romanesque style.

A series of two disastrous fires in 2006 destroyed the third church and a decision was made to demolish the remnants and establish the Memorial Garden and Cemetery on the site. The congregation of Christ Church, Mimico continued to worship along with its daughter congregation of St. James Humber Bay from 2007 to December 31, 2009. 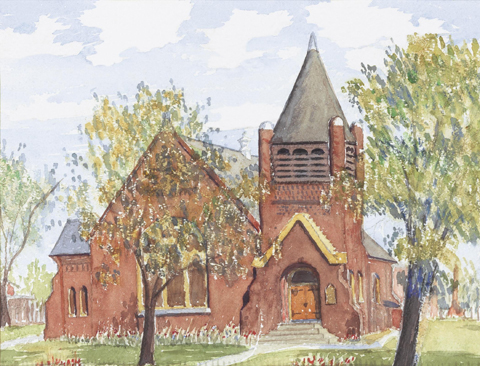 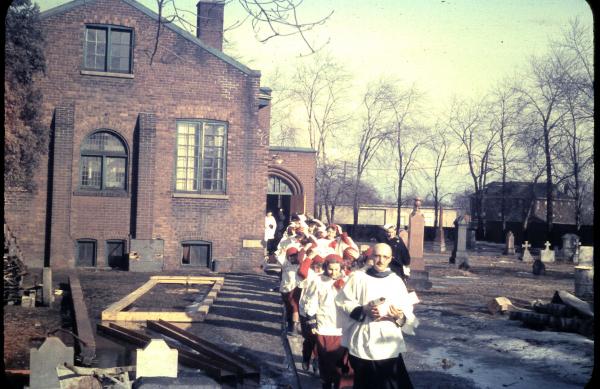 Processing from the Parish Hall 1950s 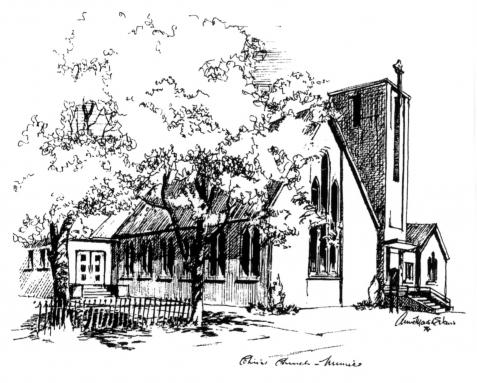 A third Christ Church, Mimico, was built in 1956 to replace the second.

In 1891, Canon Francis Tremayne, Rector of Christ Church, Mimico formed a mission which met under his direction, but with the guidance of theological students, in the coach house on the “Godson’s property,” now the site of the Humber Treatment Plant. After meeting there for some time, he built, at his own expense, the Mission Church at Humber Bay on Frederica Street (now High Street) in 1894. This mission church was still maintained by the mother church in its registers. Canon Tremayne subsequently sold the church building to the congregation, requesting far less than it had cost him to build.

The church functioned as social centre for the community, with its emphasis on Christian learning broadened by its practical ventures into outreach. By 1920, the Mission Church had grown into a congregation enthusiastic and diverse in its activities and was constituted into a separate parish and registered as St. James’ Humber Bay.

Over the next three decades significant changes occurred in the surrounding area, not the least of which was the influx of a large number of new residents following World War II. By 1950, the original building, now over half a century old, was deemed inadequate for the expanding congregation. A new building was started, as a basement church, at the opposite end of Ringley Avenue on Park Lawn Road. The old church was deconsecrated, and the property was sold. 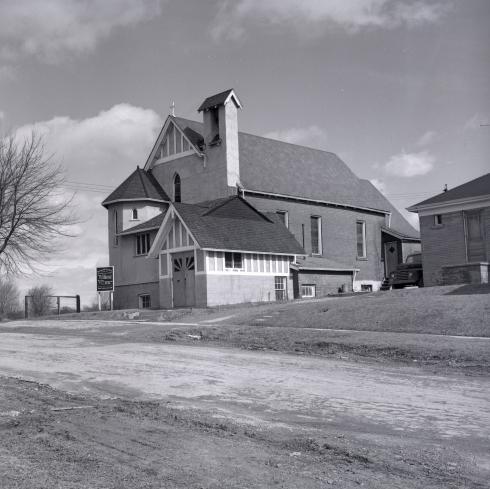 The new building was dedicated on October 15, 1952. The basement structure served as the people’s place of worship for almost seven years.

By 1959, the neighboring rectory had been built and the upper structure of the church completed, with the first service being held on May 24, 1959. An expansion effort completed in 1987 nearly doubled the size of the Sunday School and Youth Group facilities. While the interior of St, James’ had undergone radical changes over the years, the exterior of the building had not changed to the same extent. That changed in 1997 when an elevator was installed, giving access from the parking lot to both the body of the church and to the downstairs church hall. Our church is now fully accessible to everyone. To facilitate wheelchair access to the elevator, the parking lot was surfaced.

St James Humber Bay circa 1997 after addition of elevator

A new addition to the front of the church was completed in 2013 to expand our ministry of the food bank we operate.

Christ Church St. James has seen many changes over the years, but its purpose has always remained the same: to be a dedicated, strong, joyful, loving community committed to Christ and to bringing his message to all. We share diverse and interesting backgrounds; we are composed of all ages and family status; and we learn together, teaching and witnessing about and for Christ. In the fellowship of the Holy Spirit we respond to the needs of others as we strive to expand the Kingdom of God.

A new addition to the front of the church was completed in 2013 to expand our ministry of the food bank we operate.